An early rise on day two as it was Lee’s birthday! Hurrahhh – I had sneakily put up a banner in the night and managed to secretly buy birthday cupcakes the day before at the train station!

Our first port of call was Central Park for tandem biking! It’s about 10km all around the park so we were in for an exciting ride. Lee took the first cycling session doing most of the leg work hah (great birthday treat right?), and we took in the gorgeous sunshine and scenic views of the park… 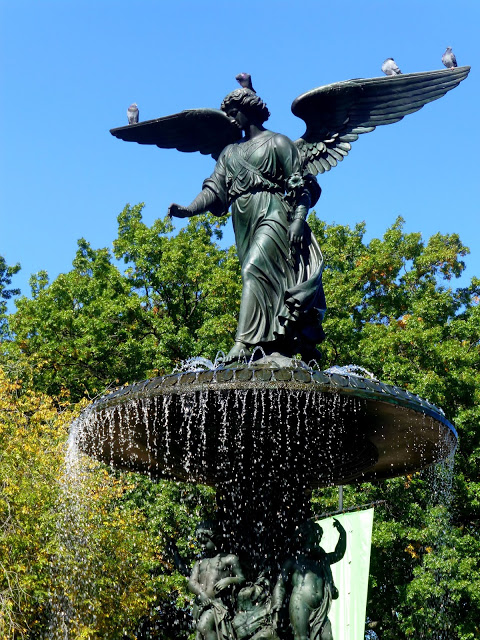 It was hard work all that cycling and despite really trying and massively failing at heading up the front of the bike (Lee was just too heavy), I needed a snack, so I tested out a cheese pretzel (much to Lee’s disgust) to keep my energy up. Probably not the tastiest snack in the world but I enjoyed it all the while.

Later that afternoon it was time to head to the end of Manhattan and take the (free) Statan Island Ferry. We hadn’t got tickets to visit Liberty Island but we knew we’d still get a great view of the Statue of Liberty from the ferry ride. 30mins later we were sat in the sunshine over the waters at Statan Island, enjoying the views and feeling very lucky to A/ be in NYC and B/ have such gorgeous weather!

At 7.30 we were due to meet for a walking tour; “The dark side of the High Line” so rather than relaxing, naturally we walked for an hour to get to the meeting spot! We met a lady called Meredith who enlightened us on the history of New York, some ghost stories and interesting “dark facts” about the meatpacking district, Greenwich Village and the area surrounding the High Line – here are a few facts you might not know –

An exciting, tiring and interesting day which we rounded off with chicken wings and beers in the classy Hooters Sports Bar (Lee’s birthday choice) – ciao for now!