Ah, the final full day – the trip flew by so quickly. We started with a little shopping (I mean which girl who steps into Sephora can really resist at least one purchase?!), we popped to Macy’s next…

I have to pause here for a short rant on Department Stores – why are they SO confusing?! I’ve learnt that American ones are just as bad as the UK stores. Nothing is in any logical order, they move things, the signs don’t relate to the content of the floors and then the staff don’t know where anything is…

So having got lost looking for Women’s running attire, we left Macy’s (which was lovely don’t get me wrong, just a little confusing) and headed south to Brooklyn Bridge for a stroll over in the sunshine in anticipation for the NY Islanders Hockey game we had booked for the afternoon! 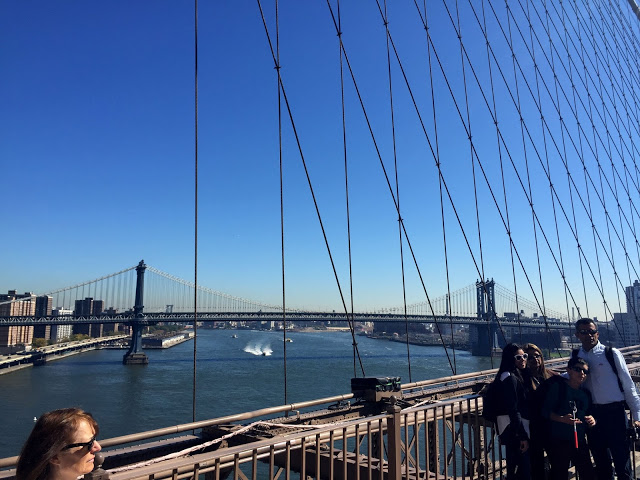 Having donned an all black outfit for the day, it’s safe to say I was regretting it in the gorgeous sunshine over the bridge – however feeling pretty smug once we were in the Barclays Center as understandably it was chilly!

After stocking up on NY Islanders souvenirs (see below, looking like number 1 fans) we embraced three periods of the game, each of 20 minutes and only counting when the puck is in play. I’ve never seen the game before but thoroughly enjoyed the aggression, competition and speed of it across the ice hockey pitch – so much fun, and we really go into the chants; “let’s go Islanders”. To make it even better there was a really cute Brooklyn family sat just behind us with a little kid giving his interpretation of the game and his fave (or not so favourite) players – a true NYC experience!

For our final evening of the trip, we got glammed up and headed to the swanky roof top bar, Le Bain, which is situated on the roof to the Standard hotel. A building that sits over the High Line in the Meatpacking district AND is also known for being the hotel whereby Solange and Jay-Z had that argument in the lift not that long ago!

Some breathtaking views of the city, accompanied by some cocktails and prosecco – the perfect (nearly) end to an amazing trip in a fabulous city!