Find a new book to read

Blood Orange – is it worth all the hype? | Book Review

23 LGBTQ books to get on your reading list now 🏳️‍🌈

How diverse is your bookshelf? I counted my books & here’s the results

We met at an airy Air BnB, which looked just like the photos. Made completely from an ikea showroom (with a huge pile of instructions to prove it), but sadly with no character or cupboard essentials (there was a box falsely identifying itself as holding tea, there was no tea). We flopped for the Friday evening as we had an early trained to Bruges booked for the morning.

Fuelled with coffee and glazed croissants we headed to our train from Brussels Midi station at around 9am – just over an hour brought us to the gorgeous city of Bruges. True to being coffee addicts we hit up Starbucks before wandering into the city to explore. As there are many canals, similar to Amsterdam and Venice, Bruges is often known as  “the Venice of the North” – exciting news for us as we were very keen for a boat ride!

First stop, having admired the cute buildings along the way, was the market square where, four sides of fabulous looking buildings and the opportunity to take a horse and carriage ride to the oldest part of the city. Despite my genuine fear of horses, we hopped into the carriage and galloped our way through the city, whilst the woman awkwardly turned around from the front to give us facts, figures and history about the areas passing by. We stopped just near a Nunnery (which we realised was called actually called a monastery), to feed the horse and take some photos of the gorgeous autumnal area by the canals. 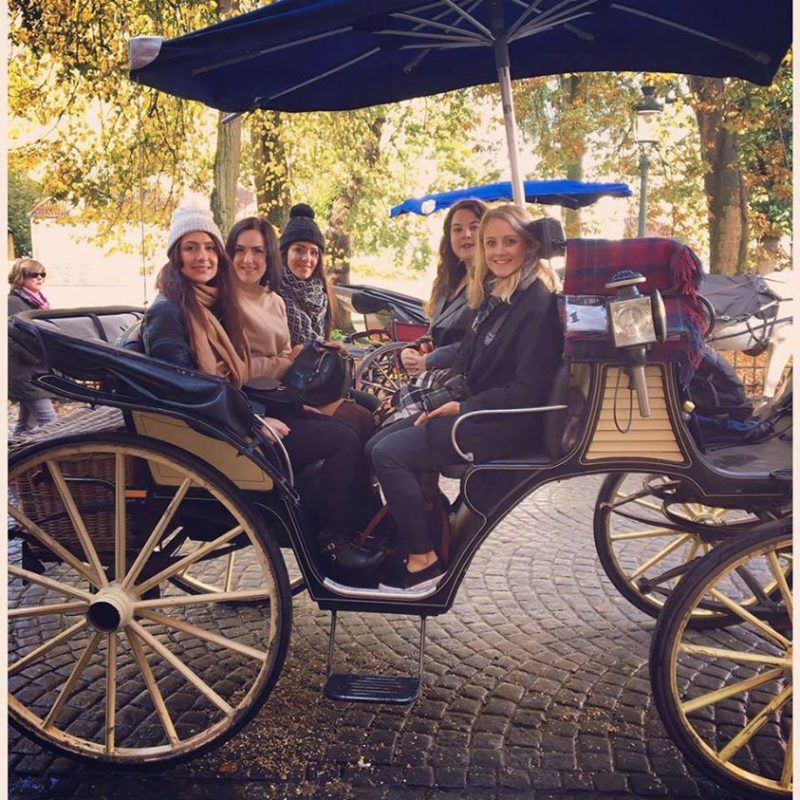 Back on the horse we stormed back to the squares – I had to delete all the photos I took en route because they were blurring ha. We popped around to the Burg square for a brief encounter on horse back (we later returned for less shaky photos). Following our exciting trip around the city we headed to a chocolate shop for some snacks to fuel a trip up the Belfry tower in the Market Square. THANK GOD we did, a 45min queue (it was like a busy night at a club, one out one in) meant we were hanging around (catching up and chatting of course) waiting to head up a number of tight, spiral staircases. Once up there, we appreciated why the number of people allowed up had been capped (obviously really really annoying when you’re standing in the cold trying to fend off a man trying to sell a cut out of your face made from paper, for €12). It was a tight squeeze and a lot of stairs, but we made it to the top!

Hurrahh then it was lunchtime – we spent some time perusing the options available but actually settled on a cute looking Italian for some pizza and pasta to boost our tourism energy! Next on the agenda, a boat ride – yes, a visit to “Venice of the North” requires a trip on a boat. An enthusiastic captain guided us via the canals of the city, pointing out features on buildings and joking about low bridges causing captains to lose their hair.

We couldn’t leave Bruges without a beer, after a wander around the streets we settled in a pub to pick a few local pints before heading back for our train back to Brussels. 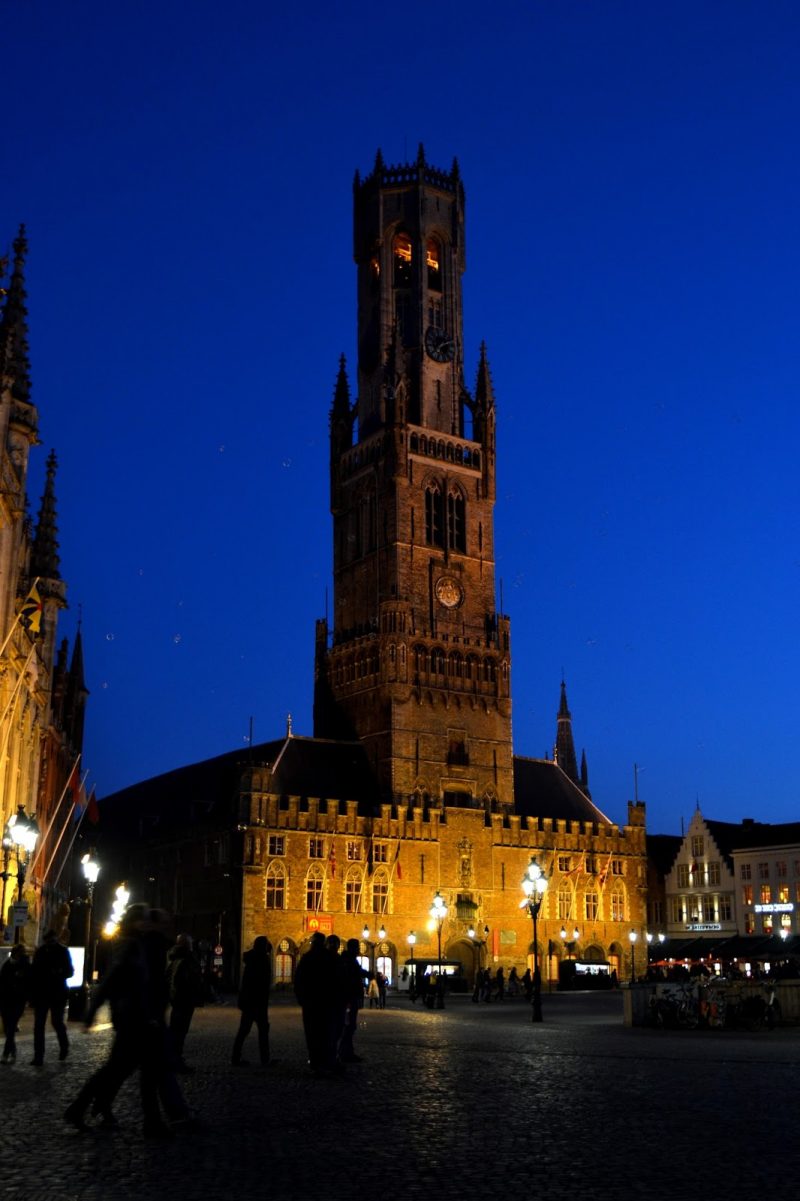 Day two, a well deserved lie (we lead busy lives you know) and we checked out of the lofty yet unequipped flat. We spent the day exploring Brussels but it was surprisingly chilly so our interests were lying more in getting food and beer than actually visiting anywhere. Saying that, we ate brunch outdoors at Peck 47 after Tash hunted down the spot to fulfil her poached eggs craving. Non of this sour-bread malarky, we had eggs on WAFFLES in true Belgium style.

Next on the list was the Golden Square – some more beautiful buildings to complement the range we’d seen in Bruges the day before. We peeked into chocolate shops and sniffed out waffles for Steph who hadn’t had any eggs earlier. Then we googled mapped down to Manneken-Pis – a surprisingly small statue of a little boy having a piss. According to my research whilst writing this post just now, he is the Statue of Liberty equivalent for Brussels and is regularly dressed up a different outfits for different city occasions – in his 400 year existence (since 1618), he’s sported some 700 different outfits – what a guy! 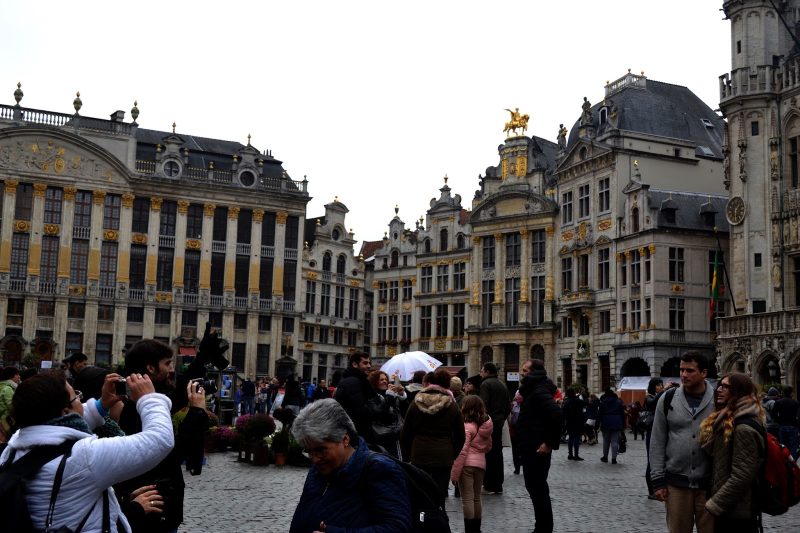 Ok ok enough of the tourist shit, let’s get back to the beers. Pre flight we spent the rest of the time sipping on Belgium Beers the size of our heads and munching salted peanuts – a delicious way to end a delightful weekend with the gals.

Have you been to Brussels or Bruges? Did we miss anything?

♻︎ Trying to live my best sustainable life along the way.

END_OF_DOCUMENT_TOKEN_TO_BE_REPLACED

Keep up to date